Spirit Photographers, Who Were They?

“Would you like a retheipt?” lisped the adolescent vampire from behind a lurid display of ghoulish costumes in Sainsbury’s. It must be Halloween again… still… even a harried exchange with a cashier reluctantly sporting plastic fangs beats the horrors of the self-service check out. Fortunately there’s been no mention of forcing the First Option Studio Team into any sort of costume this year – but in the spirit of getting in the spirit of spirits… we thought we’d tell you a bit about The Spirit Photographers – a bunch of 19th century chaps (most of whom were called William) who made their living taking pictures of the recently departed.

At the end of the19th century, an obsession with the paranormal had swept the British Isles and much of North America. Mystics, mediums and clairvoyants were doing roaring trade… and so were the photographers. Photography had at last become mainstream – ordinary middle class people were now able to afford to have their portraits taken in their homes. So it is perhaps only a small coincidence that these two booming industries collided and spirit photography was born. 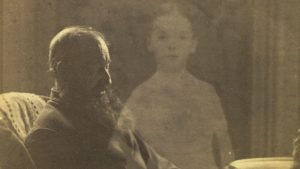 One of the pioneers, was Boston native William Mumler, who stumbled upon the practice quite by accident, when a ghostly young woman appeared in one of his self-portraits (or selfies). Mumler was quick to identify this young woman as his recently deceased cousin and in this pre-instagram era, handed around a copy this photographic marvel to everyone he met. It wasn’t long before Mumler’s trans-dimensional photographic skills were in high demand. Hoards of recently bereaved relatives queued around the block to get a picture with their dead aunt/sister/dog. But as with any rapid technological development, the skeptics were biting at his heels. In 1869, Mumler was briefly incarcerated for fraud – but unable to work out his elusive methods, he was subsequently released without trial. Mumler, no doubt feeling like he was starting to push his luck, was about to hang up his magic camera when he was approached by a very high profile mourner, Mary Todd Lincoln… who wanted one last portrait with her recently departed husband, Abraham.

Mumler, of course obliged, and his reputation was forever preserved along with this rather creepy image of the former president partaking in a posthoumus PDA with beloved wife Mary.

But Mumler wasn’t the only one to carve out a career for himself in this strange arena. Enter British born Fred A Hudson, who also snapped spectres, but upped his game by teaming up with Georgiana Houghton, an acclaimed medium. The duo enjoyed much success, which inevitably led to their demise when they were exposed by a rival spiritualist.

William Hope, from the North of England jumped on the phantom paparazzi bandwagon much later, producing his first haunted image in 1905. In 1920, Hope was approached by a gentleman named Edward Bush, who asked him to produce a portrait of his recently deceased son. Bush helpfully provided Hope with a photograph, so that he would recognise his spirit when it crossed into our earthly realm. When the work was complete, Hope eagerly presented the portrait to Bush and Bush… well… Bush eagerly presented the world with the aforementioned son, very much alive and well. And that was the end of hope for Hope and also the timely end of the spirit photographer.

Alas… we are yet to hear of any ghostly apparitions appearing on any First Option Studio shoots. The dawn of the digital age has all but eliminated the occurrence of double exposures – so there’s only one thing for it… we’re off to pick up some terrifying costumes for some freaky photo-bombing of our own.

« FOOD WASTE – WHAT CAN BE DONE? » ‘Tis the Season for Turkey, but Spare a Moment for the Humble Vegetable