During the industrial revolution, the formerly rural terrain of Shoreditch became home to the textile capital of the world thanks to the opening of Regent’s Canal in 1820, which allowed for heavy loads to travel down the East End, kick-starting fashion manufacturing.

These days Shoreditch isn’t known so much for its mass production of textiles but rather its creative styling of them: eccentric, elegant, and everything in between, here at First Option we’re smack bang in the middle of London’s fashion nexus. This is great news, since we happen to have a beautiful Victorian location studio perfect for fashion editorial shoots, decked out with full blackout lighting and even a chaise longue…

Perhaps the most famous designer to come out of the East End is Lee Alexander McQueen, who set up his Hoxton Square studio in 1993 off the success of his Central Saint Martens graduate collection ‘Jack the Ripper Stalks His Victims’ inspired by East London’s most notorious serial killer. 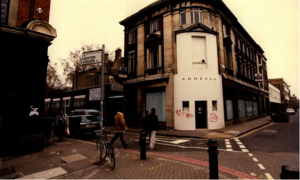 Shoreditch fashion had always been inspired by this darker side of life. The great Vogue photographer David Bailey famously used the Kray twins as some of his most prominent models, before he was taking the queen’s portrait. 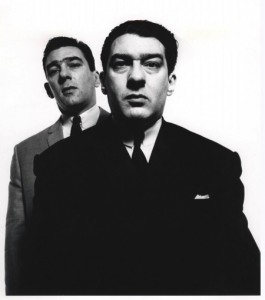 Another icon of Hoxton Square at this moment in time was the Blue Note nightclub. It hosted all sorts of cross-genre events in the burgeoning 90s club scene, most notably Metalheadz. Run by jungle & drum’n’bass icon Goldie, it showcased some of the most futuristic sounds in dance music. It was the only place in the world where you could be dancing next to David Bowie, but people were more hyped to be around underground musicians. Of course, being in a totally futuristic sweatbox required a fashion of baggy neon outfits. 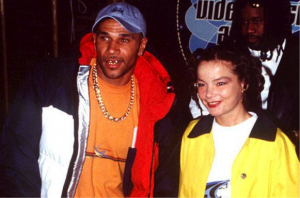 That’s the old East End. On November 4th 2010, then Prime Minister David Cameron announced plans to transform this part of London – all the way from Hoxton Square to the Olympic Park – into a tech hub that would rival Silicon Valley. McQueen’s old studio and the Blue Note are now Byron and Bill’s chain restaurants.

Weirdly, dressing smart like the Krays isn’t very trendy for the Silicon Valley via Shoreditch crowd. That being said, in the new East End there is definitely a fashion trend of ‘New-Edwardianism’ – a style inspired by the ornate old dresses originally produced in the Victorian houses like ours, owing itself to fashion brands like Alexander McQueen for bringing it back in style.

With that said, Shoreditch’s eclectic history makes it the perfect place for a fashion scene that celebrates a diverse array of influences, mixing the classic with the avant-garde, colourful and muted, smart and casual. It’s the perfect place for any kind of shoot, so why not book a slot in our location studio..?