As production gets back into full swing after a year of uncertainty, the UK is enjoying its moment as star of the screen. With many productions put on hold due to coronavirus and various lockdowns (how many is it now? A trilogy!) those that have managed to get back on set, have sought out locations on home soil. 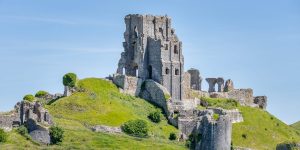 With non-essential international travel currently suspended, producers have had to look a little closer to home to find the perfect location. And perhaps Brexit has also played a part in it, with expensive visa legislation proving to be one inconvenience too many for an already stretched production coordinator.

As I write this, the country awaits updates on a complicated traffic light system that puts holidaymakers in a similar situation. For the second year running, Londoners will wistfully turn their heads towards the nether regions of the country for a ‘staycation’ and those with shares in Airbnb will once again fill their pockets and if you’re done weeping over bitcoin, it’s time to invest in Exeter Services. Boy, are they goanna flog some tea and pasties this summer!

If you are lucky enough to be embarking on a staycation… do keep your eyes peeled for people mumbling into radios dressed head to toe in North Face, because if you’ve picked a destination based on its blissful panoramic vistas, you can bet your bucket and spade a film crew has too.

First… to Cornwall, for the much-anticipated Game of Thrones Prequel ‘House of the Dragon’. Eagle-eyed locals report the construction of monolithic arches and the arrival of an armada of Warner Brothers’ trucks. suggesting that the production won’t be returning to Dubrovnik, Croatia where the previous series’ were filmed.

In London, The Batman was one of the first major productions to resume shooting in the UK during lockdown. Reports of street closures and sightings of a batmobile in our capital suggest that while the rest of us were elbow deep in sourdough and working out how best to light our chins on Zoom, Robert Pattinson was taking a deep-dive into the psyche of one of Marvel’s most deranged superheroes.

Meanwhile, the South Coast was also playing host to a small screen blockbuster, this time in the form of Starwars Andor, which I have it on good authority is the prequel to a spin-off (sorry this is not my area of expertise!). Dorset dogwalkers who happened upon the merry scene reported swarms of hooded figures, a flotilla of gazebos, and enough druggeting underfoot to sink The Ebon Hawk (yes, I had to google this reference).

All in all, it looks like it’s going to be a busy summer for the British Film and TV industry, we wish you our friends and colleagues a prosperous few months making up for lost time!

« Events: How To Be A Normal Person » Zero Waste: 5 Ideas for a Zero Waste Freelancing Life