“Light is fundamental to existence and nature and reality as we understand it. […]

Working with light as an art form… goes back through the ages.”

Following the late Her Majesty Queen Elizabeth’s passing and state funeral, the world has been turning to a multitude of art forms and artworks, as symbols of remembrance and documentation of the history of Elizabeth II’s reign and character as an individual.

One of our contemporary era’s most iconic images of the late queen is ‘Lightness of Being’ by multidisciplinary light artist, Chris Levine. Here, we focus into this particular artwork and wider series, as well as Levine’s empowering, spiritually-fuelled art practice. 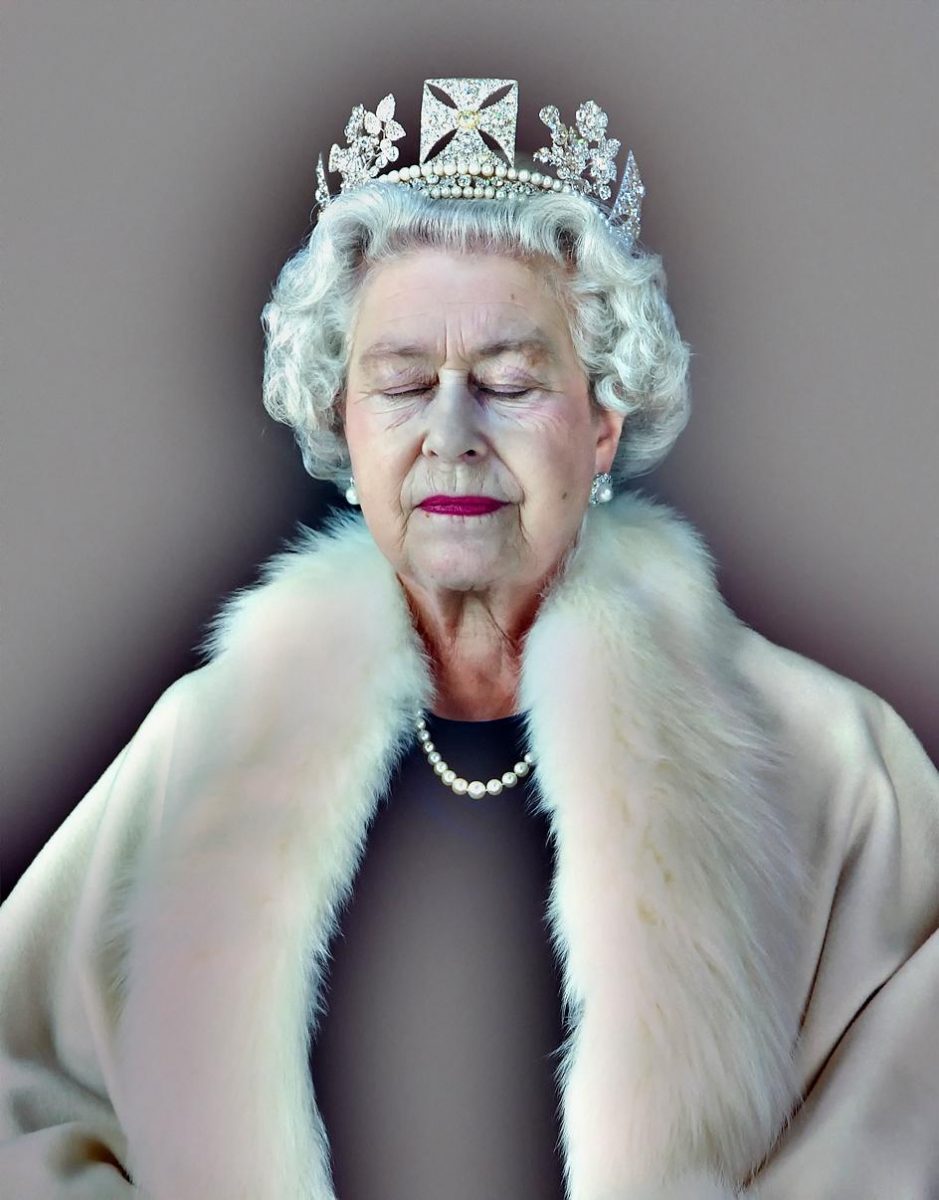 The origins of this sensational portrait series lie in Levine’s ‘wild card’ selection as the artist commissioned to commemorate the 800 year anniversary of Jersey’s allegiance to the Crown in 2004. Each of the portraits taken are given near-auspicious, magnificent titles that echo a sense of religious iconography, linking to the Queen’s own devout faith and indeed Levine’s deeply spiritual approach to his art-making.

The technical skill and nuance used in the two years of preparation and final editing of this artwork cannot be underestimated. Levine describes the valued collaborative process in creating his work, and for this series he had a custom-built camera made for shooting the queen in 3D.

‘Lightness of Being’ captures the Queen in-between shots – a moment of rest, reflection, and an unconscious moment of calm that us as viewers would never normally see. There is a sense of timelessness, both a heroic strength and touching intimacy; the accentuated light and shadow in the work itself embodies this contrast formally. The queen seems ephemeral and eternal, yet immediately present and human. It is no wonder that The National Portrait Gallery have deemed this portrait the most evocative image of a royal by any artist.

“I had a normal camera positioned at the centre of the track to shoot reference images… Because I also recorded 3D data scans of Ma’am, one of my potential post-production directions was to texture-map a photo from the reference camera onto the computer model…”

“There was a lot of light on Ma’am… I was concerned that it was uncomfortable… and suggested to Ma’am that she rested between shots. She closed her eyes and we captured the moment. Some years later, I was reviewing the outtakes from the sittings and came across the shot and was blown away.” 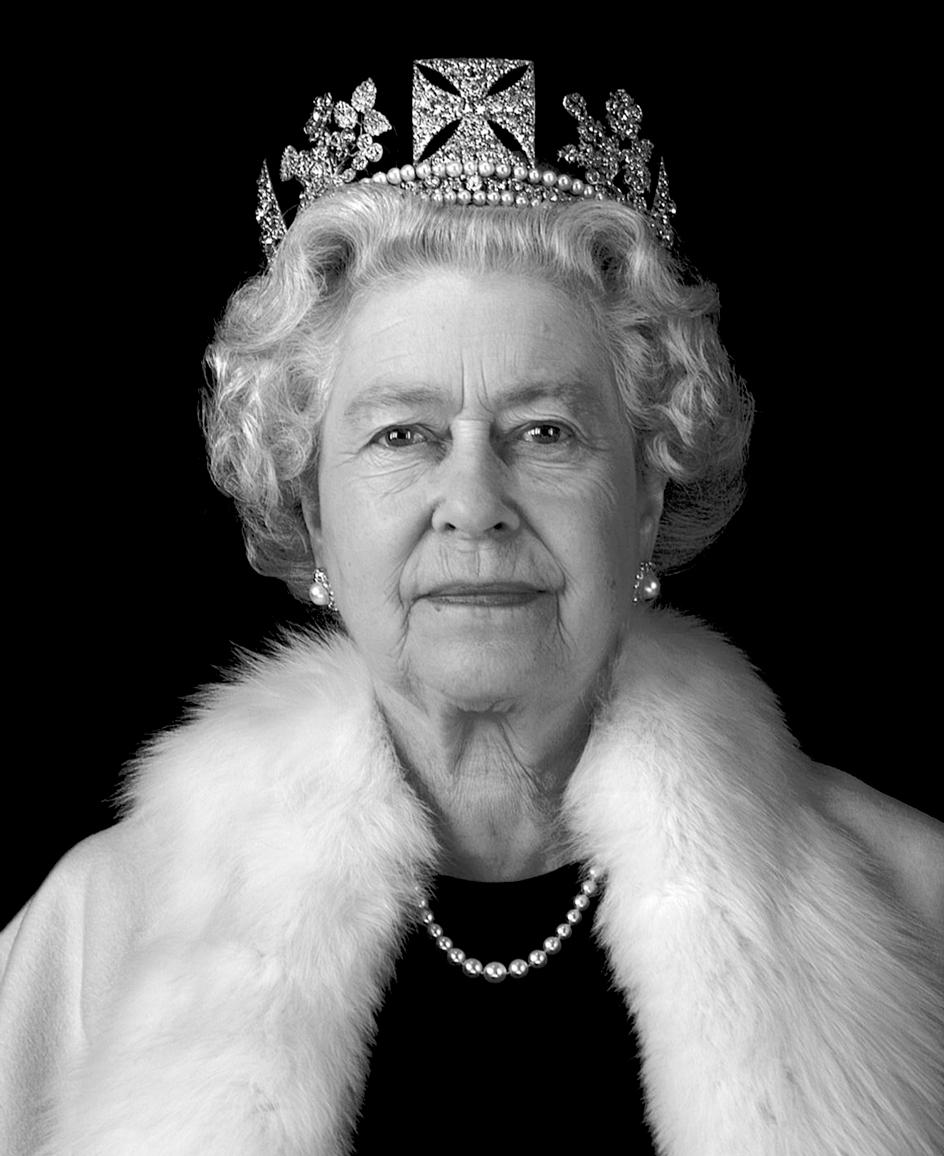 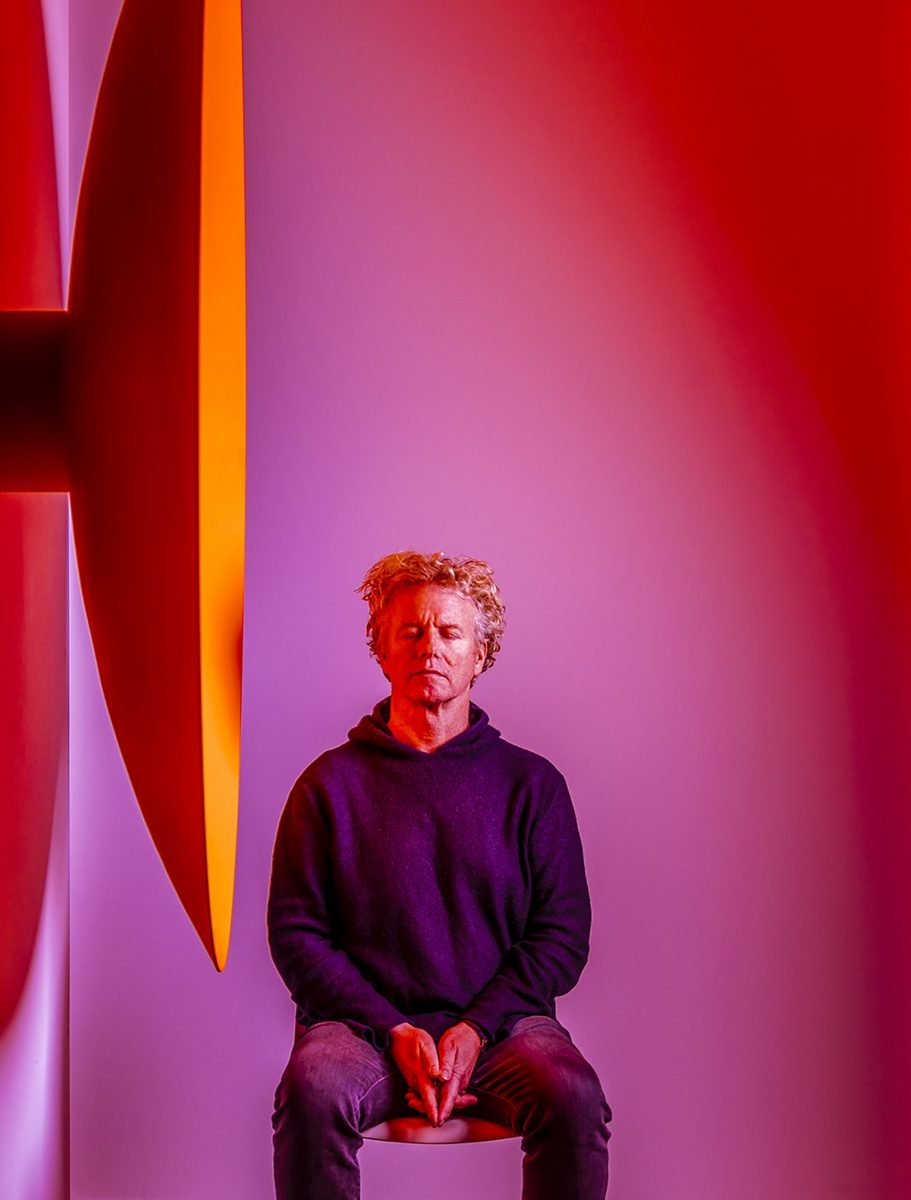 So often in creative processes, it is the moments in-between and the accidents that become the final artwork itself. Levine explains his art and photography process in many senses as meditative practice. As a light artist, Levine works across multiple mediums as an individual pursuit to expand his, and the viewer’s, state of perception and awareness.

Whether through music, performance, photography, installation, fashion, design or sculpture, Levine’s intention is to experience for himself and therefore to emulate in his audiences, an exploration into a heightened state of being. Many of Levine’s creations are poignantly experiential – arresting in their precision and detail, yet tranquil and unifying in their effect.

Signature portraits of real-life celebrities – from Kate Moss and Grace Jones, to designer Paul Smith and His Holiness the Dalai Lama – are both accurate and somehow otherworldly. The hyperrealism of Levine’s works transport the viewer into a higher sensory state, and at the same time bring us back to our immediate and ‘real’ present – the very experience often associated as core practice in Buddhist meditation and visualisation, of which Levine himself if a dedicated practitioner. 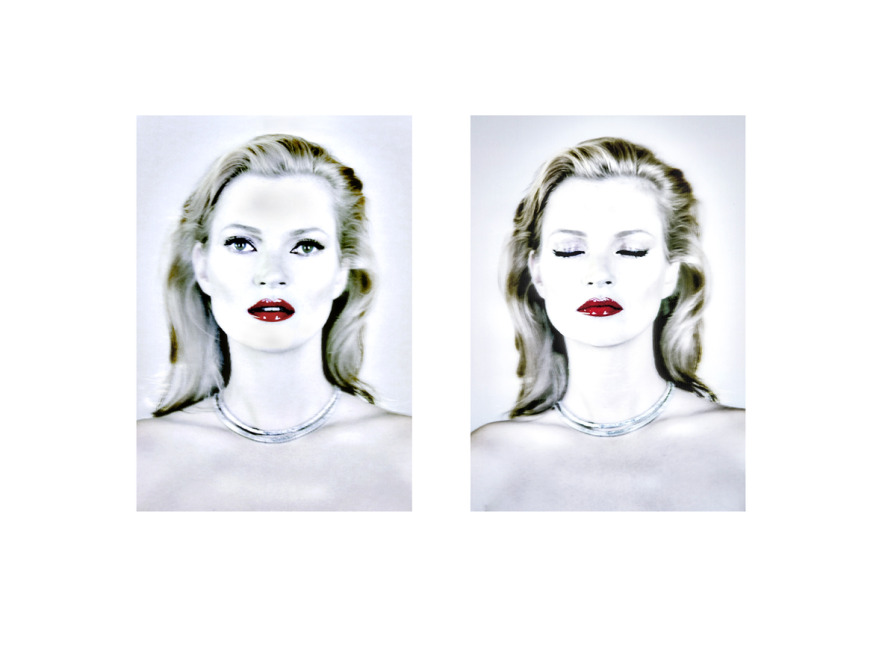 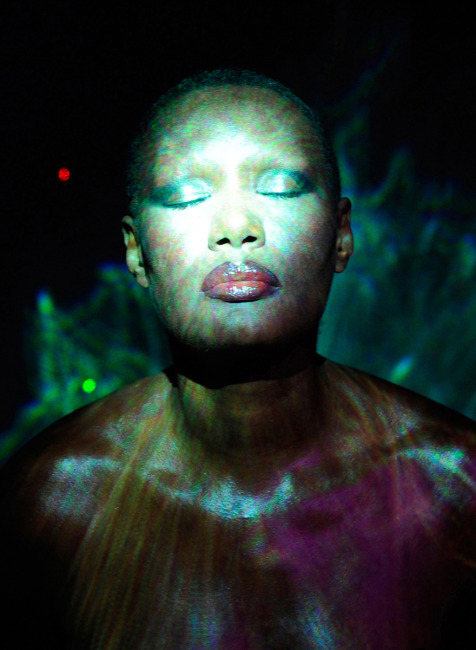 ‘Stillness at the Speed of Light’, 2010. Lightbox. via chrislevine.com 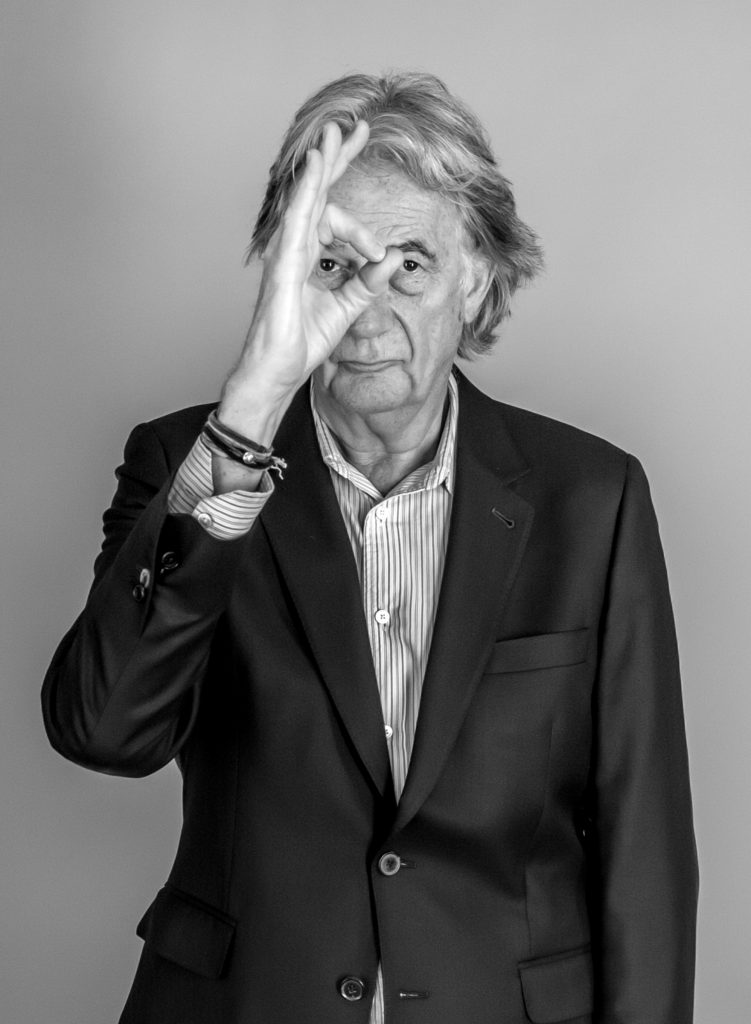 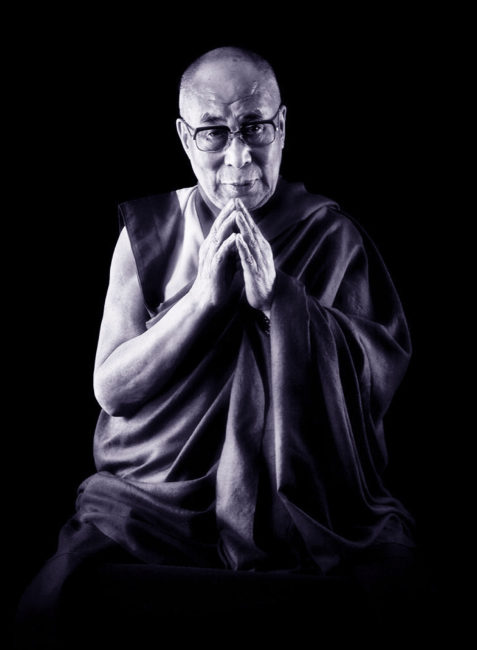 Compassion – The Dalai Lama at 80. via chrislevine.com

Levine remains a highly sought-after creative collaborator, having worked with the likes of Massive Attack, Hussein Chalayan and Jon Hopkins, and been commissioned to create installations and performances at MoMA (New York), the Royal Opera House, Glastonbury Festival and the Eden Project.

One of Levine’s most recent projects was for the historic Houghton Hall in Norfolk, the artist’s largest to date and sponsored by Sotheby’s auction house. ‘528 Hz Love Frequency’ (2021) combined a series of holographic artworks, prints and immersive site-specific laser and LED installations. As is characteristic to Levine’s craft, light is a fundamental element that is paired with sound – specifically an exacting frequency of vibrations.

“The numbers of the sound vibrations on this scale are based on sacred geometry and the notes are said to correlate with the energy nodes, chakras, in the body. There is harmony and natural order to the tones. The middle note related to the heart chakra and 528hz is sometimes referred to as the love signal.”

The shows centrepiece, ‘Molecule of Light’, comprised a monumental 6m diameter, 25m tall, 6-tonne sphere positioned at Houghton Hall’s front lawn. The steel tube circles which made up this sphere were coated with 9 layers of UV-reactive paint and lacquer, emitting a 3D ‘ambisonic’ sound, notes from the solfeggio scale. As a vibrant red ball during the day, and a core element of a masterfully choreographed laser display at night, this singular body symbolised and effected a far-reaching, unifying energy.

“I wanted to use light and geometry to create a space where consciousness and the physical realm overlap, harnessing the power of light not just as a medium, but also as a means with which to create a powerful collective experience.” 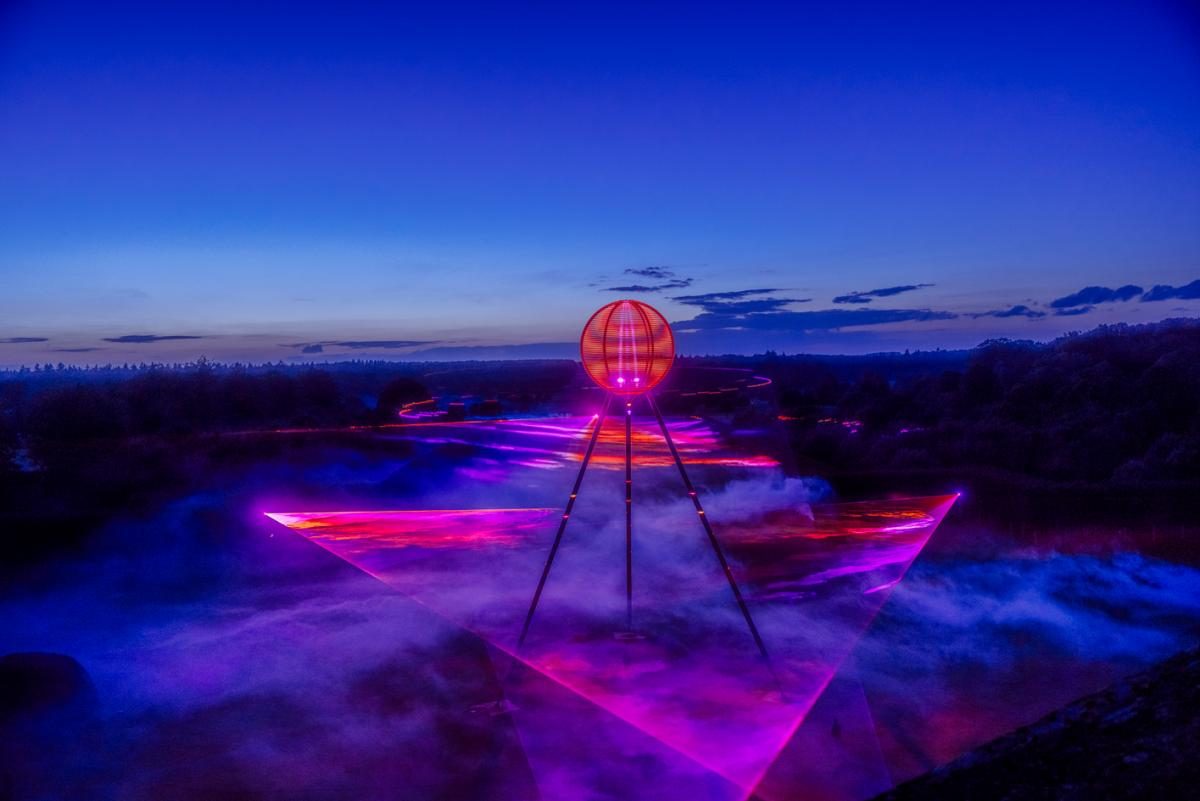 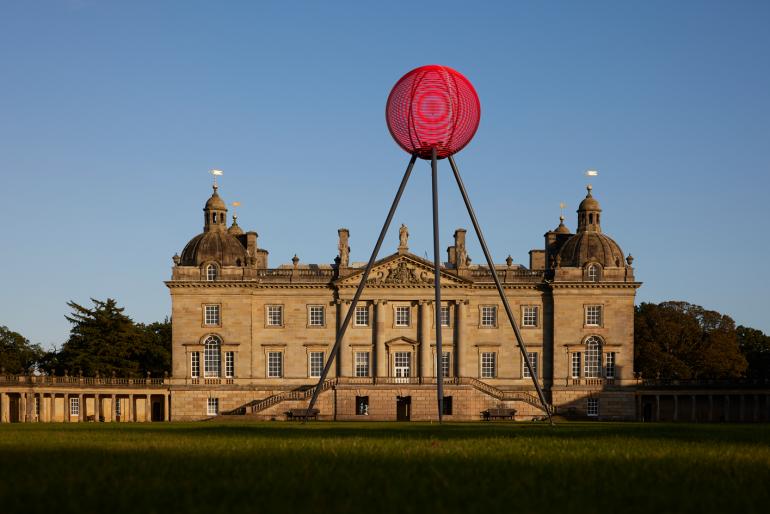 Chris Levine continues to inspire his audiences to think beyond our everyday experience, and to reconsider the possibilities of what art can really do for us, as individual beings and as how we can experience life and the world. Whether in portraiture or abstract forms, we are moved to see and understand through alternative means. In the artist’s own words:

“The more the work can be accessed through the heart and not needing to be mentally processed, the better it allows for a deeper sensory experience… time spent connecting with the work is refuge… it can be calming and revitalising. And ultimately, it feels good.”

Tweets by iamchrislevine
« Heat Wave – How films battle the elements » Hauntingly close to home! The ghosts of Shoreditch